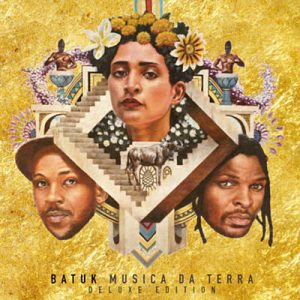 MDP: So as I told you, I’m Monde De Poche, a blogger who’s trying to discover new music like yours but with consistency and I would like to introduce yourself. If you could introduce yourself so you’re BATUK. You’re Manteiga, Aero and Spoek . This is your stage name.

Manteiga: Yeah, so fifteen, sixteen, seventeen… three years ago. And we met.

Aero: In 2012, me and Nthato met when he was issuing his documentary Future Sound of Mzansi.

I went to meet him [Aero] as an important figure in South African electronic music. And years later, we started thinking of a project that we could collaborate on.

Spoek: So I went to Aero’s house to interview him. I had heard his music before. I did some music journalism and I went to meet him as an important figure in South African Electronic music. And years later, we started thinking of a project that we could collaborate on.

MDP: So the project is about, like based on African culture? So traditions mixed with electronic music?

If we feel like we can do a project in India, nothing is gonna stop us we gonna go to India.

Manteiga: You know we not narrowed down to anything. Whatever we’re influenced by or whatever we’re really enjoy. We want to, you know, we work with that.

The core of the project is the three of us and that in itself is like Pan-African perspective in the sense that we all grew up in Johannesburg but Carla has her heritage in Mozambique.

Spoek: The core of the project is the three of us and that in itself is like Pan-African perspective in the sense that we all grew up in Johannesburg but Carla has her heritage in Mozambique. Mozambique and South Africa are neighbouring states but there is such difference of culture and at some point this means so much tension and aggression, you know. And violence at the point people where people were aggressive. But we are neighbours and as a South African I think they’ve got a beautiful country and a beautiful culture. And we wanted to do something that kind of brings people closer together and so that’s the first step, you know. Even the tree of us is already joining people. And it’s not just about ancient tradition, it’s about 2017, 18, 19 and the future of the music as well as their heritage. It’s very natural, that’s what I’m saying the fusion is already very natural.

MDP: Because I’ve been following media, publications and that’s why I wanted to ask because they always like categorize like a Pan-African band. I just wanted to make sure that it’s your opinion or you agree with that or not. It’s more natural, instinctive music.

Aero: You mean on stage?

Manteiga: Aero is gonna take it. He is the one!

Spoek: We got invited to a house party. We took a trip one time to this place in Mozambique called Bilene. There’s this guy’s birthday party that we didn’t know. We went to the door and they said « No you’re not allowed to come in! » But eventually they let us come through.

Aero: We didn’t know anyone.

Manteiga: And I’m the only person who speaks Portuguese there.

Spoek: But there was a birthday party. Family, children sleeping under the table, old women young people to someone fifty or forty eighth birthday. And the birthday cake was like a soccer field. So now we wanna singing happy birthday, we’re looking for Aero. When we looked up Aero standing right next to the cake!

MDP: I’m really interested in your creative process. Who does… you’re the singer (Manteiga). But I don’t know if you do other things… How do you proceed?

We don’t have a structure. We’re open to one another’s ideas, you know.

Manteiga: We don’t have a structure. We’re open to one another’s ideas, you know. If Spoek has an idea, if he has a beat he will send it and we’ll listen and Aero would work on it and I would add lyrics to it. Or if I have an idea then Spoek would make the beat for it, you know. We don’t have a specific structure.

Manteiga: Absolutely, absolutely. It’s based on suggestions and collaboration.
I wanted to get in and get in with production work a lot more and being involved from that perspective and have Manteiga up, you know! Have Manteiga up fronting the group.

Spoek: For me I’ve had a music career come up as a vocalist for long time, 2003 or something. But with this project in particular, I wanted to get in and get in with production work a lot more and being involved from that perspective and have Manteiga up, you know! Have Manteiga up fronting the group. So, it’s a loose structure but I know that, personally, that’s always been my interest in the group.

MDP: But you can feel it when you see your show. I attended to your show and it was mind blowing, definitely. Sincerely like, it was really great. Very great energy and this is the kind of music that I like in the way that… Even the lyrics, you know. You don’t avoid, straight to the point. And I think it’s important into music to speak the true.

MDP: So thank you very much for that interview and enjoy the rest of the day.

The rest of the interview only audio.