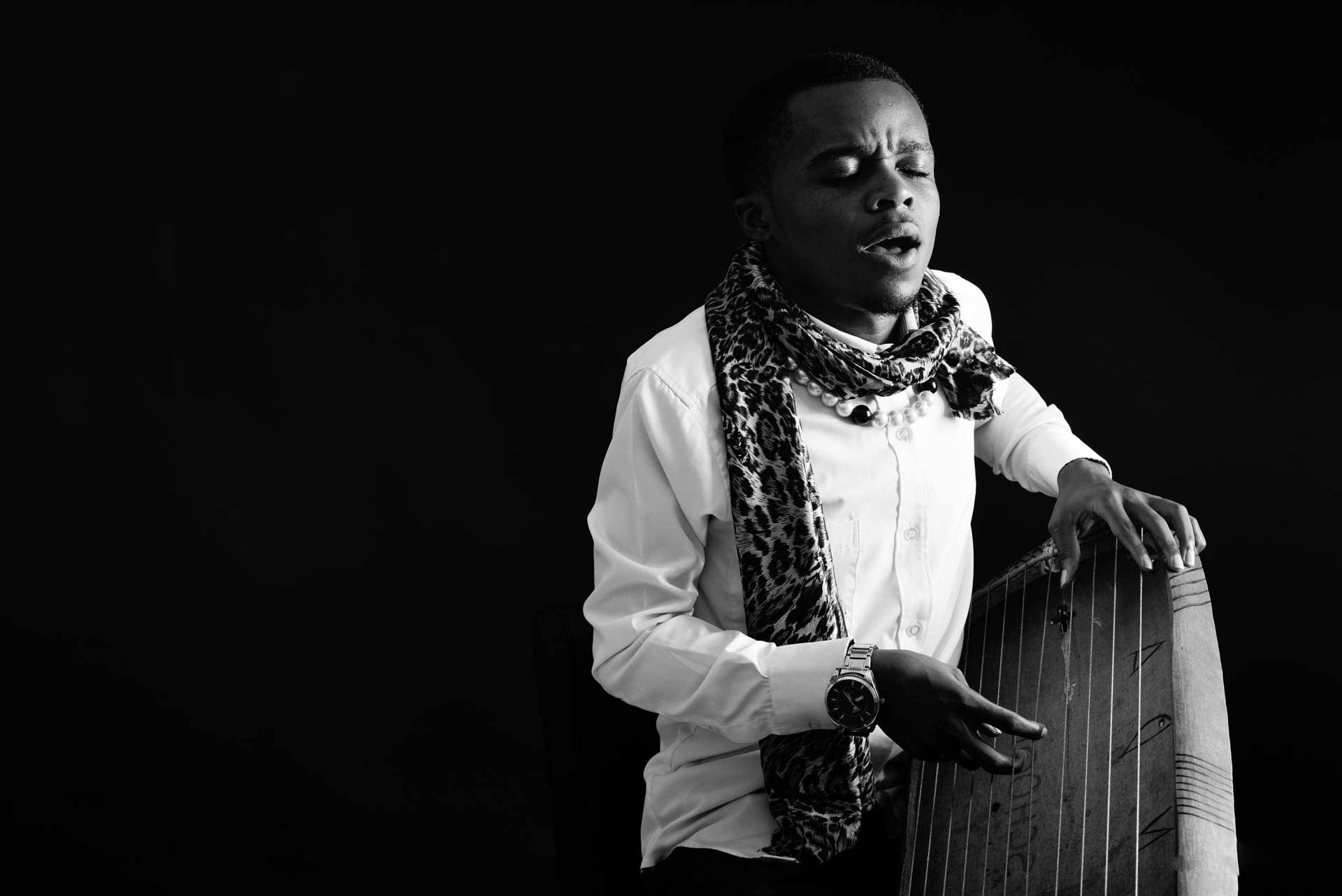 A King of Rwandan Blues

Late August, Monde De Poche had the chance to be invited to the thirth edition of the Pop-Kultur Festival in Berlin. There, you could attend to concerts, talks, performances, photo shows, music workshops. Through this large scope of activities, the event promotes diversity and addresses issues (such as gender, investment, diversity and more) in the culture industry (mainly music, theatre, poetry or visual art) gathering artists from all over the world. Europe, Latin America, United Kingdom, Middle-East or Africa. The latter region sent us in Berlin Déo Munyakazi and his Inanga, an African artist from Rwanda as talented as humble. When some artists performed at the Festival with too many technical support, and by doing so building distance with their audience, Déo got the public’s ear only with his voice and his style. An irresistible Rwandan Blues which will make you travel through a forgotten history of Rwandan ancient Kingdoms. An incentive to dig into other African music traditions. His music made me want to interview him to know more about him and his instrument.

Munyakazi Déo is a traditional Artist, singer, songwriter, Inanga maestro (traditional zither, harp-like musical instrument from Rwanda). He was born in 1992, holding bachelor degree in Arts and Creative Industries from National University of Rwanda last year. This made him to promote and bring back Rwandan traditional instrument, Inanga. He has made collaborations with many legends such as Guillaume Perret (French Saxophonist), Jef Neve jazz (Pianist from Belgium), Keziah Jones (innovator of Blufunk from Nigeria, Joss Stone (Grammy Award multi platinum winner from England). He has performed in different international festivals in Uganda, Kenya, France (Paris), Germany (Berlin).

MDP: How did you discover this instrument?

DM: Actally I was passioned since my childhood as I used to play modern instrument, piano, guitar after a while I have realized that modern music is not our identify. I have seen that Inanga, Rwandan traditional instrument, is one of our heritage, history, our own music. Then I went for our unique instrument which u can’t find anywhere else. I learnt it in 2012 by the great Inanga Maestro Mushabizi he is still alive, 67 years old. After few months, I started playing in private with my friends. I was experienced day to day ’till I started to play in a public of huge audience and became international.

In our history, more than 200 years ago, Inanga was our main instrument. It was played during rutuals, in harvest celebration, in king’s palace to make the king happy, sleepy, woking him up. After the colonialism period we received modern instruments, piano,  guitar. Little by little, Inanga was disappeared.

MDP: What place it takes in the Rwandan society in the past/now?

DM: In our history, more than 200 years ago, Inanga was our main instrument. It was played during rutuals, in harvest celebration, in king’s palace to make the king happy, sleepy, woking him up. After the colonialism period we received modern instruments, piano, guitar. Little by little, Inanga was disappeared. People were totally interested in modern music more than our traditional one, so far it looks the same. Our traditional music scene is low. This made me to work hard and improve my instrument so that people should be interested and keep our unique. And I have Inanga a worldwide project to bring it back, promote our roots as it was before, as my contribution to stand for our legacy.

I was chosen by Goethe Institute as one of ten young talents in the world to participate in Pop-Kultur Berlin Festival.

MDP: You made a great performance at the Pop-Kultur Festival, in Berlin. How did you got invited in Berlin?

DM: I was chosen by Goethe Institute as one of ten young talents in the world to participate in Pop-Kultur Berlin Festival. We spent there 10 days networking and learning a lot… I was with other Djs, promoters, rappers, vocalists.

MDP: How was your experience?

DM: I have learnt a lot. I met new people, new relationships, I got skills which will help my career, I did studio sessions with Berlin producers. We visited many different places like musical instruments museum of Berlin. I am full of inspiration.

Traditional music with electronic, it gives something new, soulful melody… It was really amazing! We have recorded some beautiful gigs, I have realized that music is like a sea.

MDP: How does it feel to play a traditional instrument among a majority of electronic music artists? Did you exchange experience with them?

DM: Traditional music with electronic, it gives something new, soulful melody… It was really amazing! We have recorded some beautiful gigs, I have realized that music is like a sea.

MDP: Could you find inspirations maybe useful to modernize or adapt the Inanga’s play or there’s no need and you play it like it was in the past?

DM: Of course there is improvement. I am playing Inanga better than before, jamming with other musical instruments like saxo, piano, guitar… to modernize it. Many years ago Inanga was played alone and It was not easy to jamm. I want to put Inanga on the next level. I am making the real Inanga Blues. Soon I will be using effects pedal on stage it’s an other amazing things.

MDP: To me Inanga sounds like blues how could/would you link these two musical genres if possible?

DM: Uhhh! Inanga is totally bluesy, roots of African music. This indigenous instrument is scaled with pentatonic tune, to mean 5 keys. If you listen to blues songs like BB King and you listen to Inanga, there is a big similarity. That’s why I say that Inanga is Rwandan Blues.

MDP: What represents Inanga to you and what do you want to communicate to the people who has the chance to here you live?

DM: I am connected to the Universe through Inanga.  I want to spread the spirit, great message to the world to introduce Inanga to the world, telling the people that we are the ones to make change. Let’s support each other, love & peace. And Inanga represents African Music, African sound, Rwandan blues, the real music!